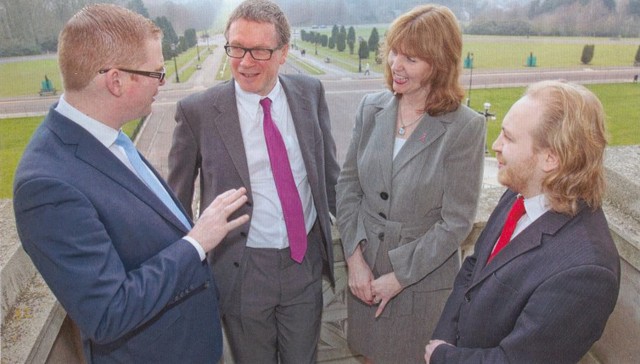 LOOKING TO THE FUTURE … Simon Hamilton MLA with Nigel Annett, Managing Director of Dwr Cymru Welsh Water; Jo Aston from the Utility Regulator and Steven Agney MLA, Green Party leader in Northern Ireland and Chair of the All Party Group on Co-operatives and Mutuals, outside Stormont Castle

ENGLISH water companies are generating hundreds of millions of pounds in operating profits, yet some of the largest are avoiding paying corporation tax, according to an investigation by the Observer. One tax avoidance device used is to borrow money at high interest rates from subsidiaries based in offshore tax havens and to claim the interest costs as a tax-deductible expense.

The conclusions of the investigation cast new questions against the claimed financial benefits of the privatisations. Even if it is accepted that privatisation was necessary to generate the private investment, there remain doubts that the model used was correct. Consumers are repeatedly paying above-inflation price increases to the water companies that have no compunction about using accounting manipulations to reduce their tax liabilities, while still paying massive dividends to shareholders.

According to the Observer, Thames Water received a tax rebate of £76m last year, while making an operating profit of £650m and paying dividends that have averaged over £250m a year over each of the last four years. Both Anglian Water and Yorkshire Water have also achieved massive operating profits, while paying little in corporation tax.

But that is England: it is different in both Northern Ireland and Wales. Northern Ireland Water is a government-owned company, which has long been considered a possible privatisation candidate. In Wales, a privatised company was converted into a mutual in 2001.

The mutualisation was achieved through a £1.9bn bond issued by Welsh Water. Since then, Welsh Water – managed and owned by the company limited by guarantee mutual Glas Cymru – has kept price increases down. They were below inflation last year. Dividends have been awarded to customers of £12m in 2003, rising to £27m – £21 per customer – in 2008. Despite this, Welsh Water has a £1 bn, three year investment programme. While operating costs have risen since 2001 for all the English water companies – by more than 35 per cent in the case of Southern Water they have actually fallen at Welsh Water. Meanwhile, there are very high levels of customer satisfaction.

Experience
It is not surprising given this context that the Northern Ireland Assembly’s All Party Group on Co-operatives and Mutuals should have invited the managing director of Welsh Water, Nigel Annett, to speak to it regarding issues surrounding water management through his experience of the system adopted by Wales. Nor that the Assembly’s Regional Development Committee should ask Nigel Annett on the same day in February to address it on the same subject.

Nigel told the DRD committee about the origins of the Welsh Water mutualisation, explaining there had been a lack of support for the privatised water companies in England and Wales. The privatised operation, added Nigel, “comes at a very high cost, because investors who support the investment programme that these companies rely on ask for a premium price in return, to account for the risk that comes with the lack of political legitimacy [of the privatised companies]”.

The model has worked, he explained, because of the shared objectives of customers and investors: both wanted a sustainable business that charged reasonable prices and provided a steady return. The mutual model provided that, but provided an additional benefit that had not been predicted – a significant boost to staff morale, which led to a big advance in customer satisfaction.

Annett added that the credibility of Glas Cymru was aided in an important way by the background of the non-executive directors, who have been what he describes as “big hitters”. The most important of these was the former chairman, Lord Burns, who was permanent secretary at the Treasury and is currently chairman of Channel 4.

‘Impressive’
In his meeting with the All Party Group, Nigel explained that, despite the real benefits of mutuality in water provision, there was a major problem with the model being used in Northern Ireland. At present water supplies in Northern Ireland are paid for out of the rateable income collected by district councils for the Northern Ireland Executive. Without a stand-alone income, it becomes difficult for NI Water to become a sustainable business of any structure, he suggested.

Douglas Mclldoon, who is Secretary of the Northern Ireland Co-operative Party and is the former Northern Ireland energy regulator, says the presentation to the All Party Group meeting was very well received. “Three things were impressive and superior to both the privatised model- that’s not hard – but also to NIW,” he says. “A – the financial ratios: cost of capital; reserves; investment; continuous improvement in position on ‘water company league table’ regarding customers’ bills; efficiencies, etc; B – public support – as it’s not shareholder-owned, they don’t suffer from nimbyism when making planning applications; C – employee sense of empowerment and commitment to serving the community.”

The host of the All Party Group event was its chair, Steven Agnew, a Green Party MLA. He said: “Water management is something that nobody thinks about until it goes wrong. The experiences of the freezing temperatures in winter 2010/11 and the havoc it caused to delivery of services exposed the weaknesses in our water infrastructure which has suffered from neglect and under-investment for decades.

He added: “We should have learned from that experience and the recurring flooding issues around Belfast that we should not wait for a crisis before acting when it comes to the management of these essential services.

Agnew said that, despite an independent review of Northern Ireland’s water and sewerage services being published in 2008, five years later there is still no decision on how to reform the service. The presentation by Nigel Annett created an opportunity on how to take this forward.

He explained: “Mr Annett’s experiences managing Dwr Cymru Welsh Water will inform the conversation about how we can create a water and sewage system fit for 21st century living.”

The event went “very well”, said Agnew. “We had a good turnout in terms of numbers, including MLAs – which is often hard to achieve at these events. What I hoped for was to put this back on the agenda and I believe we have done this.”

Whether anything serious happens now is out of the hands of individual MLAs and the All Party Group.

“To some extent now it is up to the minister [for regional development, Danny Kennedy] and the committee, but I will follow this up,” says Agnew.

Hopefully with the strong evidence now presented, another mutual utility operation could come along within a few years.