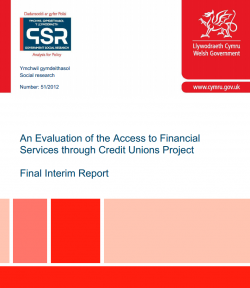 Credit Unions in Wales are supported by Welsh Government funding, the current phase of which ends in December 2013 with nearly £5.5m made available to support credit unions. The money has come from the Welsh Government and from European Funds, and is distributed by the Social Enterprise Business on their behalf.

There are 22 credit unions covering the whole of Wales providing services to more than 62,000 adults and young savers, 17 of which have had public funding over the last few years.

Ministers have praised them as part of the effort to combat poverty and an alternative to payday and doorstep loans.

But a report, commissioned by the Welsh Government says Ministers should take a more “ruthless approach” to get value for money if they continue to provide funding for credit unions and many Credit Unions will face “critical decisions” when funding expires at the end of the year.

Old Bell 3, who produced the report, found the “expectations placed upon credit unions were very high and arguably unrealistic“.

The report also highlights a “disconnection” between the capacity of credit unions and the high aspirations placed on them to help improve social justice, economic development and even education.

The report adds that if the Welsh Government continues to help Credit Unions after 2013 “it ought to take a more ruthless approach to ensure better value for money is obtained from the investment“.

North Wales Credit Union commented in a report to the BBC, that “The Welsh Government needs to support Credit Unions in challenging the ‘Poor Man’s Bank’ stereotype and help us engage with more mainstream borrowers and savers”

Other Credit Unions have spoken to us about their concerns that the report could damage public confidence in Credit Unions, and some are already fielding calls from worried members.