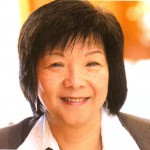 FOR much of her life, Anna Lo has played a key role in bringing communities together in Northern Ireland. Now she is heading up a bid by the Assembly to build stronger links between Stormont and the Co-operative Movement. The 60-year-old Alliance Party MLA for South Belfast has just been elected as the first-ever Chair of the All-Party Group on Co-operatives and Mutuals.

“We have just held our third meeting and it is still very much in evolution with a lot of representatives of different parties. I don’t pretend to be an expert yet on all the different co-op structures and issues, but we are all keen to get things moving.

“I am from the voluntary sector background and my constituency is in South Belfast, which is semi-rural with a lot of interest in the growing potential for agricultural co-ops.

“I am also looking forward to learning a lot more about the retail sector and new co-operative initiatives like the one which is branching out into foster care.

“In the months ahead, I hope the Movement will bring issues to our attention so we can come up with the policies and legislation needed to take things further.”

“In recent years we have had a lot more people migrating from Poland and Eastern Europe. People are beginning to accept that we are all members of a multi-ethnic community and that we need to be more inclusive.”

“I was drawn to the Alliance Party and felt it was the only party I could join because I am from a non-Christian background with no natural affiliation to tribal politics.

Despite the decades of campaigning for race equality, Anna has the distinction of being the first ethnic Chinese person to be elected to a legislative parliament in Europe.

As far as the Co-operative Movement goes, Anna says she is enjoying the learning curve – and learning fast that a collective approach is the way forward. In 2009, she sponsored a Fairtrade event at Stormont.

“It is the responsibility of the Co-op Movement in Northern Ireland to help us raise our awareness on all the issues which matter because we want to learn more about good practice and governance and help the Co-op Movement grow stronger. We are also hoping next year to bring the other all-party co-operative groups from Scotland and Wales here to talk to us about the issues they have dealt with and bring us fully up to speed.”