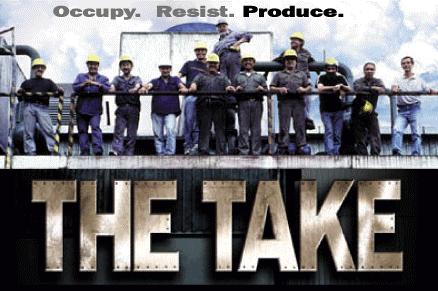 A film by Avi Lewis and Naomi Klein
To celebrate the United Nations International Year Of Co-operatives 2012, the Wales Co-operative Centre is screening ‘The Take’.

In the wake of Argentina’s spectacular economic collapse of 2001, Buenos Aires becomes a ghost town of abandoned factories and mass unemployment. Thirty unemployed auto-parts workers, part of a daring new movement of worker co-operatives, walk into their idle factory and refuse to leave.  All they want to do is re-start the silent machines. But this simple act – the take – has the power to turn the globalisation debate on its head.

“An eye-opening, possibility-widening documentary! If Michael Moore could calm down just a little and maintain a watchful distance, The Take suggests the kind of film he’d make!”
Newsday

Take this rare opportunity to see the film in Wales, be inspired and join the discussion with other co-operators.
Join us for a drink from 6.00pm – the film will be screened at 6.30pm.  Tickets are free, but availability is limited, so book now to avoid disappointment.

Alex Bird is an experienced co-operative searcher and activist. Follow him @coopalex3
View all posts by admin →
This entry was posted in Uncategorised. Bookmark the permalink.