Just 51 days after getting the keys to the Pengwern Arms Hotel, a team of volunteers at Llan Ffestiniog, near Blaenau Ffestiniog, has the once run-down pub up and running again.

In January 2009, the 300-year-old inn that stands on the square opposite the church, closed its doors. Now, two years later, villagers are preparing for the official opening in June following a massive community effort.

The villagers have set up Pengwern Cymunedol Cyf, a co-operative incorporated as an Industrial and Provident Society and received support from the Welsh Assembly Government, Tai Eryri Housing Association, Wales Co-operative Centre and Gwynedd Council.

In a test run for the official opening, last weekend shareholders and helpers were invited to check out the facilities and enjoy free beer. Volunteer staff wore black shirts with the Pengwern logo and in the cellar were many barrels including casks of real ale from the Purple Moose Brewery. 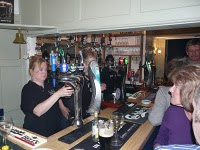 Internet users can follow the latest chapter of the inspiring story of community spirit at http://voff-snowdonia.blogspot.com/2011/05/y-pengwern-opens.html.