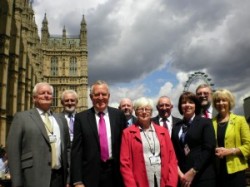 Neath Port Talbot Credit Union recently attended Downing Street, and the Houses of Parliament in recognition of the credit union’s work in their school saving initiatives.
NPTCU’s work with schools has resulted in an outstanding growth to their current 36 School Savings Schemes, whilst at the same time contributing to the increase of the overall membership to over 6,000.

Brian Warlow for the credit union said: “We at NPTCU have committed a lot of our resources to encourage the next adult generation to start saving. Life is going to get even tougher in the future for people who find difficulty in managing their money.”

Speaking about the forthcoming introduction of Universal Credit, Brian added, “Many people will experience problems with these benefit changes but we at NPTCU are committed to help our members through the problems which lie ahead. We are in the fortunate position of working closely with Neath Port Talbot CBC and the LEA, so we were delighted to have two key members of the Education Authority with us at Downing Street and the Houses of Parliament”.