Joseph (Joe) Reeves was born on 28 January 1888 in Camberwell, London. His childhood was impoverished and he left school at 13. He was a conscientious objector during World War I.  Joe was Education Secretary of the Royal Arsenal Co-operative Society (RACS) from 1918-1938. He believed that ‘the dynamic of education must be altered from individual assertiveness to service on behalf of the community’. While Reeves was secretary the Education Committee expanded its activities and provided equipment and premises for classes as well as holding drama groups and orchestras. In 1945 he was elected as a member of parliament for the Greenwich Constituency, until 1955. He also served on the RACS Political Purposes Committee from 1946-1953. 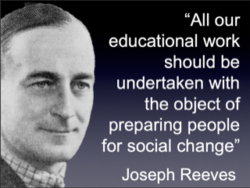