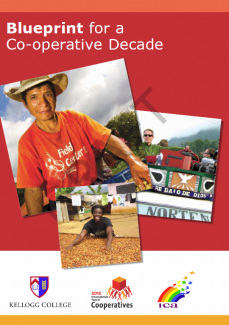 The Paper has been written under the guidance of the Planning Work Group of the International Co-operative Alliance by Cliff Mills and Will Davies, Centre for Mutual and Employee-owned Business, University of Oxford. The members of the Planning Work Group are: Stéphane Bertrand: Desjardins (Canada), Nelson Kuria: CIC Insurance Group (Kenya), Zhang Wangshu: All China Federation of Supply and Marketing Co-operatives (China), Mark Craig: The Co-operative Group (UK) and Dame Pauline Green: President of the International Co-operative Alliance.

Cliff Mills is a practitioner in the law and governance of co-operative, mutual and membership-based organisations. He has written the constitutions of a number of the UK’s leading co-operative retail societies, and worked extensively in the development of new co-operative and mutual models for public services. He has played a significant part in the development of co-operative law in the UK. As well as being a Senior Research Associate with the Oxford Centre for Mutual and Employee-owned Business, Cliff is Principal Associate with Mutuo, and consultant with Capsticks Solicitors LLP and Cobbetts LLP.

Dr Will Davies researches economic sociology, and focuses on theories of ownership, the history and implementation of neo-liberal policies, and the role of economic experts in public life. He was awarded his PhD in sociology by Goldsmiths, University of London in 2009, and was formerly a Research Fellow at the Institute for Science Innovation & Society, University of Oxford. He has authored a number of policy reports on mutualism, including Reinventing the Firm (Demos, 2009), Bringing Mutualism Back into Business (Policy Network, 2010) and a forthcoming report for the Employee Ownership Association on private sector mutuals. He contributes regularly to media and policy debates about ownership and mutualism, and has written for The Financial Times, The New Statesman, Prospect, the BBC and The New Left Review. Will is the Academic Director of the Centre for Mutual and Employee-owned Business.

Read the full report:- ICA Blueprint for a Co-operative Decade